Lisburn & Castlereagh City Council in partnership with the Ulster-Scots Agency has developed a programme of cultural activities and events to mark Ulster-Scots Week to engage with the language and recognise its value in terms of enhancing our sense of self and place.

This is part of the council's Good Relations Programme which is funded by the Northern Ireland Executive Office.

The council is working in partnership with local schools to offer storytelling to local primary schools across Lisburn Castlereagh.

You can view the stories by clicking on these links:

Room on the Broom

Watch these fun, educational videos which are a gentle introduction to Ulster-Scots words, phrases, numbers and colours created especially for children or beginners.

'History into Poetry: The works of James McKowen (1814- 1889), The Bard of Lambeg' by Gilbert Watson is available to purchase from the Irish Linen Centre from 23rd November.

This book is the first edited collection of McKowen's poems, songs and letters, and offers a fascinating insight into the work of one of Lisburn's most important literary figures. Local author and historian Gilbert Watson recognised the significance of the uncatalogued works of McKowen’s poems, publishing the edited collection almost 200 years after the poet’s birth. The book is published by the Ulster-Scots Agency, and supported by Lisburn & Castlereagh City Council.

Born at Lambeg, outside Lisburn, James McKowen began writing poems and songs in the 1840s.  Publishing under his own name, or a pseudonym such as Curlew or Kitty Connor, McKowen earned a reputation for his verses, rhymes, and contributions to the press, on local political and social issues.

The poet and author John Hewitt (1907-87) placed McKowen’s work within the tradition of the ‘rhyming weavers’, a body of 19th-century Ulster vernacular poetry.  Many of the poets – McKowen’s friends – were weavers, and their name reflects the linen industry’s role as a staple of economic life in Ulster. While McKowen was not a weaver, he spent his working life in the linen industry, employed as a finisher at Glenmore Bleach Works, near Lambeg. He lived at Millbrook with his wife Rebecca, and his evenings were spent reading and writing. He retired to a home at Beechside Terrace, Lisburn, where he died in 1889.

Buttermilk Loney with songs about Ulster Scots area and chat. Brendan Popplestone and Barry Macaulay discuss and perform some songs and tunes with surprising Ulster connections. 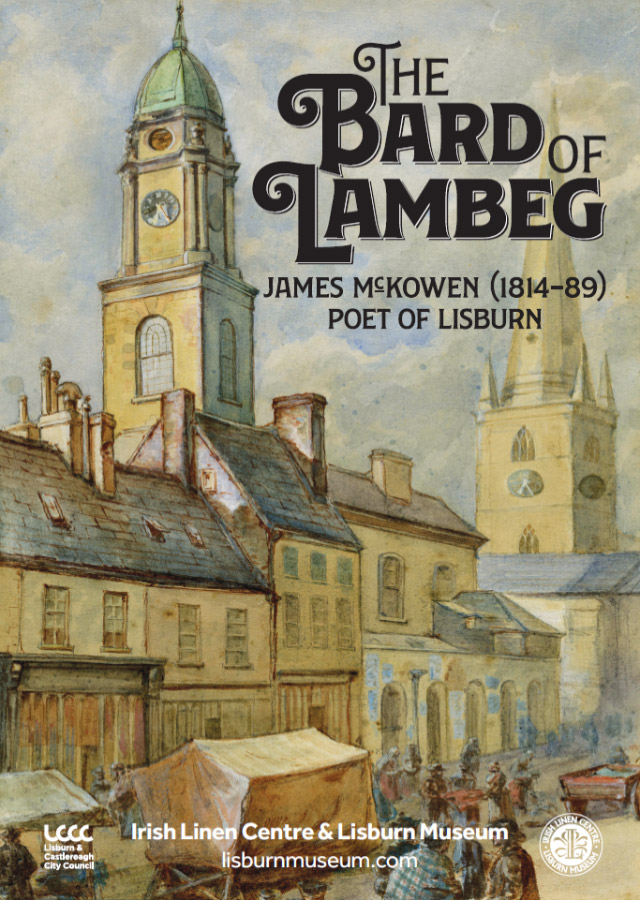 The Bard of Lambeg exhibition

From the 23rd November you can view the Irish Linen Centre & Lisburn Museum's new exhibition, 'The Bard of Lambeg, James McKowen (1814-89), Poet of Lisburn'.  The exhibition explores the life and work of local poet and historian James McKowen, and is launched in conjunction with a new book by the author and historian Gilbert Watson.

To learn more about Ulster Scots why not read our fact sheet.